Just after a few months of working on my projects, I started realizing that Arduino issues are a real thing, and I needed to find a solution as soon as possible. I couldn’t find a lot of answers on the internet, I had to learn them the hard way. So, I thought I’d share my learnings in the form of an article explaining 10 common Arduino issues and how to fix them.

The 10 most common Arduino issues are:

While working on Arduino projects, I’ve learned how to deal with general hardware and software issues, which is one of the reasons why Arduino is worth learning. So, I’ll be sharing my personal experiences of dealing with the Arduino issues below, explaining the why and the tested solution for them.

What Are Some of The 10 Most Common Arduino Issues?

Arduino may seem like a piece of cake, but it’s much more than that. When it comes to errors, Arduino has a long list of them, which I’ll try to summarize by explaining just the 10 most common issues.

The Arduino bootloader is a vital piece of code that allows the microcontroller board to read the program that is present in its memory when the board is turned on or after reset. The bootloader also enables you to change the program by writing and uploading a new one. It waits for an instruction from the Arduino software.

In case you have a bootloader problem, your Arduino won’t perform the above function, and neither will a new code upload to the board. The Arduino bootloader issue is one of the most common problems faced by beginner-level users as well as experienced Arduino hobbyists.

For a detailed guide, visit this website. This article will guide you on how to deal with the most common bootloader issues.

If this happens, you won’t be able to upload your program to the board. To avoid this issue, you need to get in the practice of checking your COM port when you connect the Arduino to your
computer.

An Arduino COM port issue can also lead you to one of the most common problems, which is the “not recognized” Arduino on your computer. You can see which COM port Arduino is present by checking the bottom right corner of the Arduino IDE screen.

The solution is straightforward; you need to check which COM port your Arduino is using. If the right port isn’t selected, then you can easily pick it through the Arduino IDE:

Another problem that many people go through is errors in connection, meaning there’s a problem in connecting the board to a computer. Using the wrong type of cable is one of the reasons
why there’s an error in connection.

We tend to use our mobile charger as a USB cable for Arduino because it fits well, but the charging cable can’t transmit data. Charging cables don’t have data lines; hence you should invest in an original Arduino USB cable.

A connection issue can also pop up if the USB port of either your computer or your Arduino board is not working. Troubleshooting for this error is necessary because this is one of the reasons why your Arduino code won’t upload.

To solve the Arduino connection issue, you can buy an original Arduino USB cable, made especially for data transmission. Click here to buy one from the Arduino store. You can even find one from an electronics store near you.

If you want to learn how to fix an Arduino USB port, check this article here.

The drivers present in your computer are responsible for running external hardware devices such as I/O devices, printers, and Arduino boards. An Arduino driver issue is also a common problem. It occurs when the Arduino drivers present in your computer aren’t automatically updated, and your PC doesn’t recognize your Arduino board.

To fix the issue of outdated drivers:

If that doesn’t work, then to solve this Arduino driver issue, you’ll have to install them manually.

Click here to know how you can download an Arduino driver and install it on your computer. If you’re using an ESP32 module in your Arduino project, then brace yourself for encountering problems. Arduino ESP32 issue pops up when the IDE and your computer fail to recognize the ESP32 module. No matter what you do, you won’t be able to upload any piece of code, and this requires you to perform some basic troubleshooting if you want to get rid of this Arduino ESP32 issue.

Open the Arduino IDE and check whether you can see the ESP32 module over there (as in the image above). If it is present, then you need to click on it and select it. Otherwise, you’ll have to download the ESP32 add-on for Arduino. It will allow your computer to recognize the module.

Also, try pushing the reset module on your ESP32 device, this might make things work.

If you need to dive deep into finding a solution for the Arduino ESP32 issue, then click here.

Sometimes, an Arduino IDE issue causes problems and doesn’t let you upload the program to the board.

How can you know if it’s an Arduino IDE issue that you’re facing? Well, if you get a “launch4j” error window popping up on the screen every time you click on something in the IDE, then you might be having an Arduino IDE issue. This error occurs because of a glitch in the backend of the Arduino IDE.

Arduino IDE is a java application, and launch4j is a java tool that allows apps to run in Windows OS. Sometimes, launch4j goes undetected by the Arduino IDE, and that’s where the problem starts.

The solution to this Arduino IDE issue is straightforward. All you need to do is restart your computer and relaunch the Arduino IDE. I’ve done this many times, and it quickly solves this problem. To fix the Arduino serial monitor issue, you need first to check the connections of your circuit. To make sure there are no incorrect connections and loose connections: 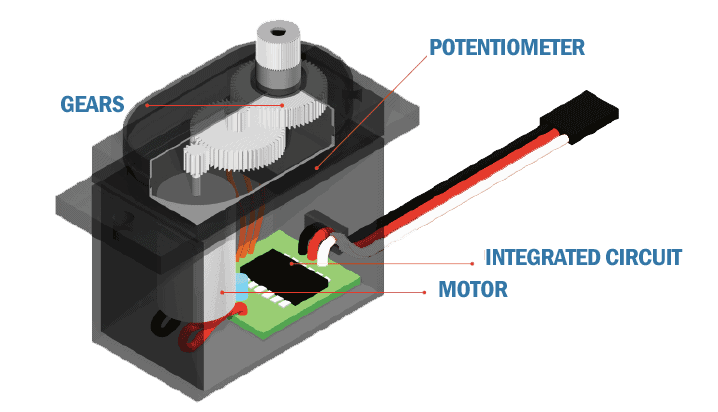 Servomotors might look easy to work with, but in reality, they cause a lot of errors. One such Arduino servo issue is that the servo motor doesn’t start when connected to the Arduino board. Servomotors require a high starting current, and this is where the problem begins. The motor needs more current, which lowers the voltage on other pins of the Arduino board, and it resets itself. This cycle continues to go on, and it appears that the servomotor is not starting.

To fix the Arduino servo issue, you need to provide a proper source of current to the servomotor. One way is to add a capacitor between the 5V and ground connections on the breadboard. The capacitor acts as a charge reservoir, supplying extra current to the servo to allow it to start without any hassle. Keep in mind that the capacitor must be of high value. Anything greater than 470 uF can solve the problem.

Another solution is to add an external power source for the servomotor. A common practice is to use batteries to power servos. Doing so will fulfill their high starting current requirements and save you from dealing with servo issues.

If you want to see how to power a motor avoiding this Arduino servo issue, don’t miss this article.

Grounding circuits is essential because it saves your project from unexpected power surges and damage. Grounding in Arduino can sometimes be an issue because the ground pin might refuse to
work, or you’re not connecting it correctly. Whatever the case is, you need to fix any Arduino grounding issue as soon as possible to save your project circuitry from damage, like your board getting fried.

There are several Arduino programming errors that can cause problems and delay your project. Most of the programming mistakes are pointed out by the compiler, but some of the minor ones go unnoticed, which is very annoying.

Here are some of the most common Arduino programming errors that the compiler doesn’t point out.

If you’ve been programming your Arduino board lately, you’d know the difference between the equals “=” operator and the comparison “==” operator.

Using the two interchangeably isn’t an option because they have different roles. If by mistake, you type one “=” sign at a place where you had to compare two variables, your code won’t work the way it is supposed to, and you might never find out why your project is acting this way.

Float and Integer are the standard data types used in C/C++ programming.

Floating-point numbers are those which contain a decimal, while integers, on the other hand, are whole numbers.

If your program is performing a mathematical calculation of dividing 20 by 6, the answer would be a decimal number (3.33). If you use an integer to store the answer to 20/6, then you’d get a ‘3’ instead of 3.33. The 0.33 difference seems like nothing, but if you need precision in your project, then this difference is going to be significant.

The compiler won’t count this mistake as an error, but it can cost you a lot by hindering the way your project works.

An array is a collection of values stored one after another. The size of an array tells you how many elements are present in it. For instance, if you have a variety of size 6, it means there are six elements in it. They can be numbers, strings, or alphabets. What’s important to note is the element numbering inside the array.

The counting always starts from 0 for arrays, which means if you have six elements, they go like 0, 1, 2, 3, 4, 5. If you want to access the first element of an array, it would be element 0, not 1. The last element of this array would be 5 and not 6, as many people mistakenly believe.

Many people make the mistake of not numbering the array elements correctly, which renders incorrect values when accessing the array.

To avoid these programming mistakes, you must always double-check your code before uploading it to the board because the compiler doesn’t catch the errors mentioned here; hence you need to keep your observation skills sharp and correct these mistakes.

Running your code with these mistakes will affect the performance of your project, and you wouldn’t easily find out what’s causing these problems.

I hope you’ve understood the possible causes of these 10 Common Arduino Issues and How to Fix Them. If you stay cautious of these problems in mind while working on your upcoming Arduino project, you’ll save a lot of time that you previously spent debugging errors.

I wish you all the best for your future Arduino projects. Happy coding!